I like the idea that we’re living in a multiverse; of our universe co-existing alongside many alternative universes with subtle differences compared to our own.

Thinking about the multiverse can lead to all sorts of interesting thought experiments. It can also be a good way of framing the future – what decisions can you make now, for instance, to improve the probability you’ll live in a more desirable future universe?

Maybe Taylor Swift is on to something when she sings “the greatest films of all time / were never made” (”the 1”, Folklore. Great song on a great album).

There are lots of things that can “haunt all of [our] what-ifs” (Swift again, “cardigan”, same album). Or there are lots of times we can ask “if one thing had been different, would everything be different?” (Taylor again, “the 1”).

This doesn’t just apply to Taylor Swift’s could-have-been-relationships. It applies to many things. For the purpose of this article, I’m thinking of people who are popular for the ideas they share.

My conclusion is that while it’s worth following popular authors, podcasts, and the like, it’s also worth pursuing less well-known thinkers – and actively reaching out to them.

In each case, it’s the same people, with a slightly different concoction of luck and circumstance.

The paradox of popularity

At the time of writing this article, 98 songs have had over 1 billion streams on Spotify:

If you haven’t heard of half of these songs or artists, don’t worry. Neither have I.

Before I get to my point, I will mention that I find this video about the making of the most-streamed song, Ed Sheeran’s “Shape of you”, oddly fascinating:

If you want to feel even older, below are the artists with the most songs in the “Top 100” of most-streamed songs: 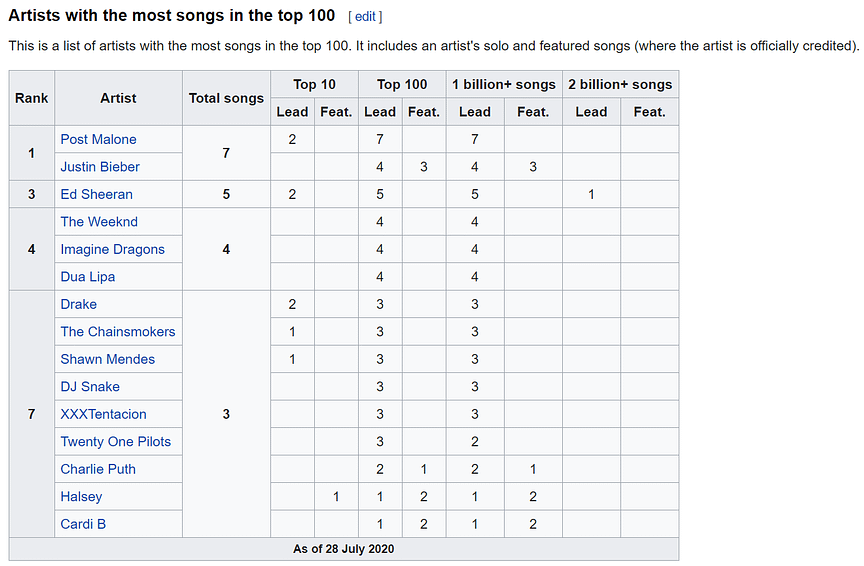 You're not really a loser, Taylor.

Cultural products often resemble “winner-takes-all” markets. For every Ed Sheeran who gets billions of listens on Spotify, there are many more artists who are barely ever heard.

For every J K Rowling, there are millions of authors who sell less than 100 copies of a single book.

Are some songs, books, and movies simply better than others?

Is this because some songs, books, and movies are better than others? Or is there something more at work?

If there is some qualitative difference between those successful cultural products, shouldn’t it be easy for people to predict what will succeed before they take off?

About 15 years ago, some researchers investigated this. (One of these researchers was Duncan J Watts. His books Six Degrees: The New Science of Networks and Everything is Obvious (Once you Know the Answer) are terrific. Has last book was published in 2011 – I hope he writes a new book soon!)

In an experiment relating to a sample of songs, listened to by over 7,000 people in different conditions, these researchers found that social influence increases “inequality and unpredictability of success”.

Songs deemed popular by early listeners benefited from something resembling runaway success. In different conditions, the early popular song were different, and these early songs ended up being the most popular in each condition.

The researchers acknowledged that quality is a factor: “The best songs rarely did poorly, and the worst rarely did well, but any other result was possible”.

So, quality is a factor. Creating something that is bad probably precludes runaway success – although E L James never got the memo with her Fifty Shades books.

But if you create something good, the reality is that there are a good amount of social factors that determine your success rather than the quality of your output.

It seems pretty evident that this sort of finding wouldn’t just relate to cultural products like songs, books, and movies.

This phenomena could relate to:

It also relates to “popular thinkers”. I want to explore this more.

With popular thinkers, what tends to happen is that someone gains prominence in one particular field. In order to gain prominence, this person usually needs to have a massive intellect and be a good communicator. However, they also need to spend years cultivating expertise, developing a profound understanding of nuance after nuance after nuance in their domain(s) of expertise.

One or more events might bring these individuals into the public eye. Their preeminence in their field can create a halo effect. Their ability to communicate effectively leads people to think that they have valuable insights in fields that are outside of their own.

Like the doctor who thinks they’re a great stock picker, driven more by the confidence that they’re a doctor rather than someone who has spent years developing specialised knowledge and skills, these people who have been lifted into the spotlight often think they have worthy opinions.

My favourite example is Jordan Peterson. I will give him this: he seems to be an excellent clinical psychologist and have some great insights in his domain of expertise.

But expertise in one field, like being a clinical psychologist for high-functioning individuals, does not translate to expertise in other fields, like politics and philosophy.

Speaking effusively and vaguely, using big words like “Postmodernism” and “Marxism” that you can define in your own way (Motte-and-Bailey-style), and creating strawmen like equating “equity” with “equality of outcomes”, do not give your thoughts more weight than those of any other well-read, articulate person.

On top of this, there is an entirely different category of person who gets into a prominent position due to hustle and good fortune. For me, Tim Ferriss is the poster child. Tim’s influence is e-n-o-r-m-o-u-s. (The Tim Ferriss maxim: “Tim Ferriss is more influential than you think, even when you factor in the Tim Ferris maxim.”) But was this inevitable? Is this an indicator of the quality of his thoughts? No. I still listen to his podcast occasionally, because he attracts good guests, but not for his insights or his special skill with the questions he asks. I don’t need to hear him ask Neil Gaiman about where he buys fountain pens.

Nor do I need a dude who doesn’t have children explain to me that if you “win the morning you win the day”.

The A-listers aren’t the ones worth seeking out

You can work out what Steven Pinker, Sam Harris, Nassim Taleb, or whoever you want to include on this list, have to say by reading their books and listening to them discuss things on Youtube or on various podcasts. They often have great things to say (even if they have their own failings and you might have a different view on some or many areas).

But personally, I think the magic is with less well-known people.

These people will generally provide a different perspective to the “popular narrative”, which is usually popular because it’s voiced by people who are already popular.

These people are often just as smart as the well-known people, even if they don’t have the same reach. (Remember: there are no Supermonkeys.) In fact, these people also don’t have the same interruptions and demands, so they can stay focused on being smart and reading new things. This is probably beneficial in terms of maintaining a high level of unique intellectual output.

They also don’t have the same incentives a popular person might have. For example, Jordan Peterson panders to his fans, by avoiding clear answers to topics that might not be liked by his followers. Sam Harris uses a very "clean" patronage model, but it nevertheless means he'll primarily attract people who share similar views to him, and this incentivise him to cater his views to that audience.

You can reach out to non-A-listers

You want to chat with Tim Ferriss? Good luck with that. Even if you can get some time with him, your access to him will be limited.

Reach out to someone who doesn’t have the same following and popular demands? You might just make a friend.

This is a “beware the hook baited with prestige”-type question.

Do you want to have interesting thoughts, get to know interesting people, and have stimulating discussions?

If you want ideas, and you want relationships, then A-listers are not the people to approach and get to know.

Just because they’re well-known doesn’t mean they are qualitatively “better”. It’s just as likely that they rode some runaway success from some early popularity.

In an alternative universe, they’re probably just an ordinary person.

It’s better to find the ordinary people who would be A-listers in alternative universes.

The good luck for us is that they're out there 🙂