We may be in recession territory. Stats NZ recently stated that growth in GPD for the March 2022 quarter was negative, and “recession” is commonly defined as two consecutive quarters of falling GDP.

When I look at Google Trends, it tells me that more Kiwis are searching for the term than usual:

Whenever I hear the word “recession”, I’m reminded of Alfred Kahn, who worked in Jimmy Carter’s administration. When told not to use the word, he started referring to recessions as “bananas”.

Before the word recession was in common use, the word “depression” was used more often. “Depression”, in turn, was adopted because it was softer than “panic” and “crisis”.

The words we use to describe economic events are important. As another example, in the past week or so I’ve seen the housing market described as a “bloodbath” (which is rubbish; QV’s May 2022 House Price Index shows that despite the last few months seeing a downturn, the median house price in New Zealand is substantially higher than it was 12 months ago, and very similar to what it was six months ago).

We may be “halfway down the road to recession”, as one politician describes. But let’s put it into context.

Yes, quarterly GDP growth was negative for the quarter ending March 2022. But what really matters, in my opinion, is the size of that figure.

If we have another quarter with GDP falling by 0.2% New Zealand will technically be in a recession.

But is that a big deal in the scheme of things?

Two scenarios can share the same label but be very different in substance.

Some things to keep in mind

Downturns are associated with other things, like share prices falling. Various markets around the world are now being labelled as “bear markets”.

If you’re invested in shares (either directly or via a managed fund), remember that the value of your interest in these shares are a function of two variables:

If the price of an individual share reduces, then the dollar figure related to your investment reduces.

However, keep the following in mind:

Step back, and think about the long-run

Earlier in this article I shared a Google Trends showing search trends for the word “recession” over the past 12 months.

I have a confession: I lied with statistics.

Relatively speaking, there has been an increase in searches relating to the term lately. But it’s nothing when we step back and contextualise search queries over a longer time frame: 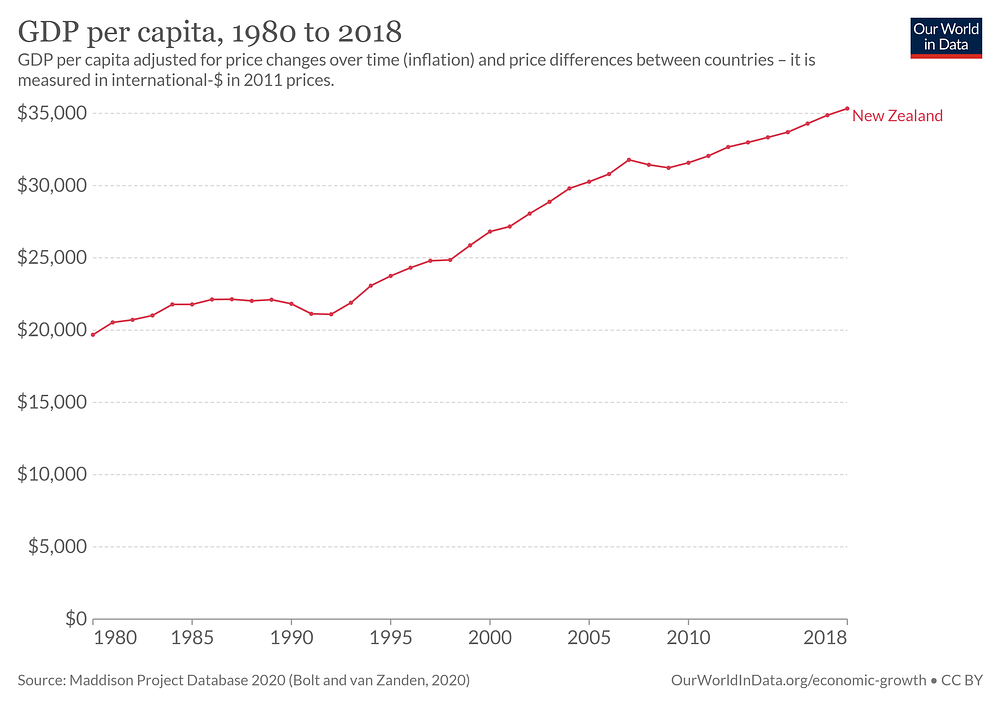 Yes, there were times when GDP per capita fell or stayed static. But the long-run trajectory is pretty amazing.

Inflation is reported as a single figure. For the March 2022 quarter, Stats NZ reported inflation as 6.9% compared with the year before. This was the largest movement in over 30 years.

This is based on the Consumers Price Index (CPI), which is calculated based on a specific basket of goods and services.

In case it’s not obvious, different households purchase different goods and services each year. This is especially pronounced when we think about people at different ages and stages, and people in different financial situations.

Ask a young couple who have been wanting to buy their first home about inflation, and it’s likely that their lived experience will be very different to the couple approaching retirement who has been living in their “forever home” for the past 15 years.

Similarly, the experience of a single person in their 20s might be very different to that of a couple in their 40s with young children. Or compare the experience of two people in their 50s, where one person is in a secure role earning hundreds of thousands of dollars (and has lots of debt secured against assets that appreciate in line with inflation) and the other is in less secure employment that doesn’t pay much more than minimum wage (with no significant assets/debt).

(Interestingly, Governments with high debt levels benefit from inflation. If you’re the nation’s largest borrower, and owe $50 billion, but inflation is higher than the interest/coupon you’re paying on that debt, then in a sense, inflation is eating away at the real value of this debt. That’s a win! The flip side, of course, is that Governments don’t like inflation because it reduces the likelihood that they’ll be re-elected.)

In the same way that inflation doesn’t impact everyone evenly, nor do recessions.

There are lots of people who thrive during recessions. Even if it might seem like they’re going backwards in the short-term, or in something resembling the doldrums, once the wind is that their back again they might often reap the rewards of the downturn much later.

In the short-term it can be hard to position oneself to be able to be resilient in the face of economic downturns, let alone thrive in uncertainty. From personal experience, all I can say is that it’s important to get through challenging periods and learn lessons. One of the lessons I have learnt is to dedicate time and energy over the long-run to becoming more resilient to inflation and recessions over time.

Predictions WILL be wrong

One of the reasons economists (for example, decision-makers within central banks) make predictions is to inform current decision-making, which inevitably influences the future. Ideally, if you predict a recession banana based on current trends, you will make steps to stop it from happening, or reducing its magnitude.

One way of thinking about it: a central bank’s job is to make its own dire predictions wrong.

There’s more to life than money

When Covid first hit, I remember being fairly sanguine about it. (Read my article from February 2020 and make your own assessment whether that’s actually the case!) My immediate concern wasn’t our family’s balance sheet. It was about our health, and the health of our loved ones, especially those who were most vulnerable to Covid.

(I also saw a lot of silver linings.)

The way I saw it, it was that this was just a chapter in the story of our lives. I thought it was quite likely that it would be a setback, and that it might mean my wife and I would need to work a little longer at the tail end of our professional lives. So long as we’re alive and in relatively good health, c’est la vie.

At the end of the day, we are only two or so years out from experiencing the start of a global pandemic! Some people have suffered, in myriad ways.

But it’s astonishing that many of us have got through as unscathed as we have.

If we have hard times ahead, then we have hard times ahead. To a large extent there’s not much that most of us can do about it. All we can do is make sure we’re playing “attack” and “defence” when it comes to making financial and lifestyle decisions, in the sense of aiming to achieve the things we want to achieve, and reducing the probability and impact of the things we don’t want to happen.

One of the worst things we can do is let labels such as “recession” or “bear market” scare us, without thinking through what they actually mean to us. Not all recessions or bear markets are the same.

Next time you hear a scary term, think of whether it feels quite as scary if you use the label “banana”. Or “apple” or “orange”.