Get lit! (with these fiction books)

Anyway. At the request of several readers and friends, in this article I'm sharing some books I adore.

This is a small sample of books that I've read and enjoyed in recent years. One of the big filters I've applied is that I've tried to focus on books you might not have heard of.

I hope there are some gems for you!

The First Fifteen Lives of Harry August by Claire North

This book has been described as "Groundhog Day on Red Bull". It tells the story of Harry August, who lives the same life over and over. I loved this book and have gifted it to several people. 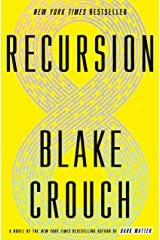 These two books, both by Blake Crouch, use different time travel/multiverse conceits. The one similarity between them is that they are thought-provoking, emotional, page turners.

The "Villains" novels by V E Schwab: Vicious and Vengeful

These books are a different take on the superhero genre. We follow the antagonists. (Although, frankly, I'm not sure there are any good guys to be seen in these books.) These books are well-written, and I hope Schwab writes more in this series.

The Bone Clocks and Slade House by David Mitchell

David Mitchell is probably best known as the author of Cloud Atlas, which was turned into the weirdest movie of Tom Hanks' acting career (with the possible exception of Bonfire of the Vanities?).

But, man, The Bone Clocks is an impressive book. It has big ideas, and an expansive alternate universe. Each chapter is written through the eyes of a different character. It's as though Mitchell explicitly tried to turn the difficulty level up to maximum. And in my view, he pulls it off!

Slade House is more simple and contained, but it's essentially a spin-off from the world of The Bone Clocks. I really hope Mitchell returns to this world and these characters again.

Blogging is a funny experience. You hit the "publish" button for an article and it's out in the universe. After that, it's hard to know who reads this blog and how it resonates. I'd love to hear your thoughts, and find out about you.

Great sci-fi, with lots of action and twists and turns. I enjoyed the entire "Old Man's War" series, but I thought the first two books were the standouts.

The Right Stuff by Tom Wolfe

This book is decades' old but it fizzes, crackles, and pops.

Tom Wolfe, at the height of his powers, could make anything interesting.

(If you're astute, you'll note that this is actually a book of non-fiction. But I include it with fiction novels because it feels more like a non-fiction book. It has a distinct narrative force.)

When I finished this book, I felt like I'd lost a friend.

When people ask me whether I'm religious, I sometimes reply that I'm a Bokonist. Bokonism is a religion in this book, with the central tenet that we should "Live by the foma [harmless untruths] that make you brave and kind and healthy and happy".

This is the first and only Stephen King novel I've read to date. (I've read his novella, A Good Marriage, and it haunted me for months.) I can see why he's so popular.

This is an interesting take on the time travel genre: time itself is almost a character.

David Wong/Jason Pargin is a long-term contributor to the comedy website Cracked. (The website and its podcast haven't been the same since Jack O'Brien left, but that has nothing to do with Wong.) Wong is a great writer who consistently explains insightful ideas in colourful ways.

This book is bonkers. In the best possible way. I look forward to the sequel, which has the working title "Zoey Punches The Future In The Dick". If that's too irreverent for you, then this probably isn't the book for you.

David Nicholls is best known for writing the novel One Day, which was subsequently made into a movie starring Anne Hathaway and an unforunate attempt at an English accent.

Sweet Sorrow isn't the sort of book I'd normally read. But sometimes an author earns your trust, and repays you for giving them that trust. That's the case here: it was a touching story which coloured my perspective on life, and made me appreciate the unique experiences of others just a little bit more.

Think twice before winding up your family trust

Think twice before winding up your family trust

“Only shallow people do not judge by appearances”

“Only shallow people do not judge by appearances”