How money misconceptions can put your life into hard mode

My son is starting to get into video games. In many games, you have the option between playing on "easy mode" or "hard mode".

Sometimes I think we unnecessarily put our lives on "hard mode", when we'd lead much more meaningful and rewarding lives if we switched to "easy mode".

One reason some people live in hard mode is because they have misconceptions about how much they need to save in order to enjoy a comfortable retirement.

Sometimes people make statements that breed insecurity about this topic. Sometimes these statements are well-intentioned and sometimes they're self-interested. But there needs to be an antidote to this.

I hope this article (and my blog in general) goes some way towards making people feel like they don't need to unnecessarily live in "hard mode".

There is no shortage of examples in the media that exacerbate these misconceptions.

And nor do you need $2 million in order to retire. One of the best examples I've come across recently was from an NZ-based podcast, Darcy Ungaro's NZ Everyday Investor podcast. On his 14 January 2019 episode, he interviewed Andrew Nicol of Opes Partners.

I've listened to a few episodes of Darcy's podcast. He sounds like a good guy. This isn't intended to be a criticism of him or his podcast, which I'll continue to listen to occasionally.

What do you think?

Most of the episode is fairly innocuous. In fact, if you were interested in investing in property it might even be useful.

But embedded in the conversation is a set of statements that are astonishing. In my view, they encapsulate some major money misconceptions many Kiwis have. It breaks my heart that this is the sort of message that gets disseminated by two people who are holding themselves out to have some sort of special knowledge and background on the topic.

I'll quote fairly liberally from their conversation because they provide a perfect, real-life illustration.

Misconceptions about how much you need at retirement

Darcy says that "I think that of the people who think they've got enough money for their retirement [are] probably wrong." Andrew agrees: "Absolutely".

Darcy recalls a comment from one of Andrew's presentations: "there's probably only going to be about 5 in every 100 people born today that will be able to survive financially in their retirement." If this is what Andrew is really saying, it concerns me.

For one thing, unless our society changes profoundly, can you imagine a world where we accept a reality where 95% of retirees are in poverty? This goes back to my comments about NZ Super which I'll discuss below. There will at least be some safety net. Maybe there will be a portion of people who struggle to survive financially. Maybe that will be 5% or 10% or 20% of retirees. But it's not going to be 95%.

Andrew also says "most people would probably be $1 million short at least at retirement to live a modest life".

Where does he come up with this figure? This seems like a random, round figure, plucked from thin air.

Even the Westpac-Massey retirement guidelines don't say you need $1 million to live a modest life. The Westpac-Massey guidelines are probably the most rigorous figures we have available in NZ, but in my view even these guidelines overstate what you need. In short, these guidelines use a weird sample set - using "receiving NZ Super" as a proxy for retirement, even though many people from this cohort are still earning (and spending accordingly). It also assumes that expenditure stays constant throughout retirement, and nor does it factor in the possibility of downsizing/rightsizing property and other assets).

In the podcast, things go further off track. Admittedly, Darcy starts by saying "Please, don't anyone rely on this formula". But then he proceeds to give a "really, really rough back-of-the-envelope formula":

"take your current net income, multiply it by the number of years that you think you're going to be alive in retirement, and that's how much you need to have when you reach retirement"

This sort of statement might as well be tailored to me. I'm at an age where I might expect to work for another 30 years, and where I might hope to retire for 30 years. $100,000 a year probably isn't far from the lifestyle I'd like to aspire to during my twilight years.

If I took this statement at face value, it would terrify me.

So let's do the maths.

The maths of this "rule of thumb" don't add up at all. If I throw this into Excel, I get the following: 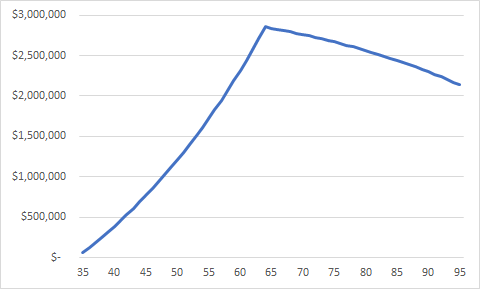 The horizontal axis refers to age (I'm assuming a starting age of 35, retirement at age 65, and living until 95 - ie, save for 30 years and retire for 30 years). The vertical axis refers to how much money I'd accumulate until retirement, and how much I'd have throughout their retirement. (For what it's worth, I'm older than 35! I just want to keep the figures nice and clear.)

I have no issue with rules of thumb. But to be useful, they need to have a decent relationship to reality. The only way the rule of thumb would work is if I stopped generating any returns at all at the time I retired, which I don't think is a reasonable assumption.

By my calculations (which assume I'll continue to generate investment returns once I'm retired), I'd "only" need to accumulate $2 million rather than $3 million to support expenditure of $100,000 per year. This would require me to save $3,500 per month rather than $5,000 per month. This isn't nothing, but it's still $1,500 a month (or around $400 per week) less than Darcy suggests.

The figure gets even lower if we make some other assumptions. For instance:

Based on these assumptions, we'd need to save less than $1.5 million, at a rate of $2,500 per month for the next 30 years. Our kids will still stand to inherit a fair amount from us, including the equity in our home, which isn't included in these figures.

In other words - if we're prepared to make the simple assumptions above, we need to save half of what Darcy suggests.

If I thought my wife and I needed to save $3 million over the next 30 years, we'd be putting our life on "hard mode".

Instead, we're happy to rely on assumptions such as those above. We don't feel like we need to save nearly as much as we otherwise would. It means that we've felt free to make decisions like working part-time (in my wife's case) and me setting up a business which generates less income than a less traditional lawyer-type role but is a better fit with the lifestyle we want and the values I want to live by.

We get to spend more time with each other and the rest of our family. We can enjoy things we wouldn't be able to, if we were both working full-time, slogging our guts out.

We get to enjoy life on "easy mode".

On top of this, we also don't need to take unnecessary risk with our investments, like borrowing to invest. Nor do we spend as much as we tend to spend when we're working full-time and don't have time to think mindfully about our spending habits and sometimes need to revert to stress-induced "retail therapy". (I've been there.)

We also live a healthier, more sustainable life. We're not living for a retirement that is the "light at the end of the tunnel". In fact, the balance is so good that my hope and expectation is that I'll keep working as long as I can - and ideally, I'll die with my boots on.

In the context of this conversation, Darcy makes a pretty emphatic statement about NZ Super:

"I can almost guarantee you, if you're listening and you're less than 55 years old, forget about it. And I'm not just being cynical, I know what the demographics say. And it's not gonna happen."

Intuitively, this makes sense. NZ's population is ageing. The dependency ratio (the number of people between 18-65 relative to people who are outside of this range) will increase substantially.

But it's one thing to have an intuition about this, and another to actually look at the numbers.

As I wrote about recently, the NZ Institute recently published an excellent report about NZ Super. One of the key messages is that the sky is not falling. NZ Super as it currently stands will be affordable into the future, as long as we decide we want to keep it.

I'm the first to acknowledge that there are uncertainties about NZ Super, and that it's something we should be engaged about. But you're assuming a lot if you're telling someone under the age of 55 that they won't get anything.

My advice to Andrew - and to you, my dear reader

My first piece of advice for Andrew is: be careful if you're giving presentations and making representations that only 5% of Kiwis will be able to retire comfortably, before subsequently explaining that borrowing to invest via property is one of the only legitimate ways to be able to retire comfortably. Based on my background as a former financial services lawyer, I'm pretty confident that this will eventually attract regulatory scrutiny, if it hasn't already.

At a more personal level, Andrew makes a revealing statement in the interview. He says if he held the equity he has in property in a more liquid fashion - for example, in a bank account - he'd "be taking Fridays off" and "taking longer holidays".

My interpretation is that he'd be enjoying his life a lot more.

I don't know Andrew's full circumstances. But I'd recommend that he give some serious thought as to whether to actually take Fridays off and take longer holidays. We don't know what the future might bring. But you have the present, and you'll probably enjoy your life a lot more.

By having more time to spend with loved ones, it's likely he'd also reduce the likelihood of one of the big financial risks that many people are exposed to: relationship breakdowns. (That's the subject of another article at some point in the future.)

Ironically, this is one of the aspects of being a financial adviser I find the most surprising and rewarding. For many of my clients, the most important part of the financial advice process isn't telling them how to invest. The most important part is the conversation where I ask them what is important to them - what they want out of life, what they're concerned about, and how they balance competing priorities.

For many of my clients, the most important thing I can give them is the reassurance that they're on the right track. Rather than instill them with uncertainty and self-doubt, I give them confidence.

It's much sweeter to work and invest because you want to, rather than because you need to.

When you see the world through this lens, life starts to feel like you're living in "easy mode". I can't recommend it highly enough.

Read more about my thoughts about how people get financial advice in relation to direct property here. To my mind, this is a scandal in plain sight. And although there are many great things about the upcoming changes to how financial advice will be regulated, I fear that removing this distinction between AFAs and RFAs will make this more common and difficult to identify.