The myopia of compound interest

Compound interest is magical! But there’s a myopia that surrounds it, too.

The magic of compound interest is something many financial gurus like to talk about. 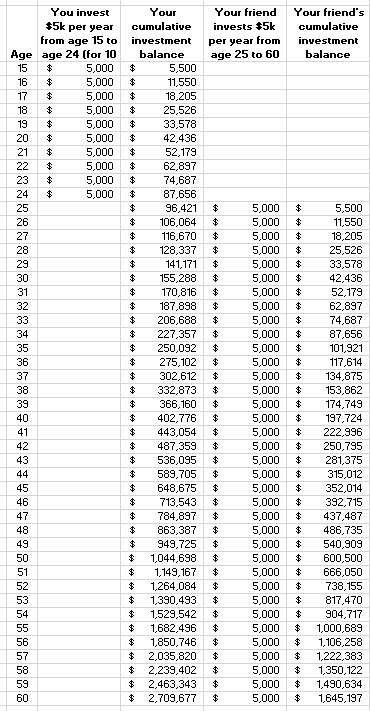 It’s meant to demonstrate the value of investing early rather than waiting until you’re older.

If I put these two scenarios into an actual chart (rather than a table), the cumulative balances look like this: 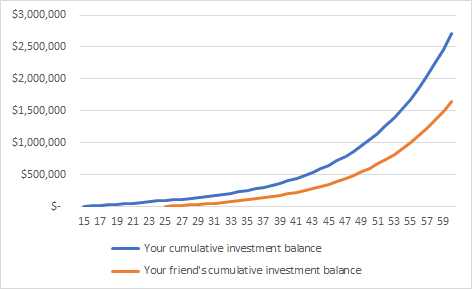 One thing that’s worth pointing out is that this example assumes a constant investment return of 10% per year. Which I’d argue is pretty optimistic and exaggerates the impact of investing early. If we assume, say, a 5% return the chart looks quite different:

What do you think?

It reminds me of the maxim, “tell the lie that tells the truth”. And I’ll be honest: I’ve done the same in the past, when I talked about “headwinds” versus “tailwinds”. But I digress.

This isn’t just a Barefoot Investor thing. It’s pretty common to see this sort of point being made.

The implication is that you need to start saving and investing early. It almost goes further: get started early and you can rest on your laurels for the rest of your life.

I agree with the importance of saving, and the value of compounding returns, in principle.

But I think it’s easy to take this too far. The purpose of this article is to provide a counterweight to this prevailing wisdom.

One of the troubles with this “magic of compound interest” narrative is that it tends to rely on some enormous assumptions. It also takes a narrow, myopic view of what it means to invest.

I also think it creates something of a “moral panic” when it comes to personal finance. It makes people feel bad for not doing more when they were younger. I wouldn’t be surprised if, instead of motivating people, this message had the effect of being disempowering.

The reality is, it’s a good message, and you can illustrate it in a compelling way. But most people don’t front-load savings, and it’s unrealistic – and perhaps counterproductive – to expect them to do so.

It’s easier to save when you’re older

If you start later, you may end up having to invest more than if you started earlier. But as you get older it can get easier to save.

If you assume a 10% return, as the Barefoot Investor does, you might never catch up to your friend.

But at a more realistic 5% return, your friend will catch up to your 10 years of saving after 20 years:

Sure, that’s an additional 10 years of saving.

Investing in financial assets isn’t the only way to “invest”

The other thing I feel compelled to point out is that there are trade-offs with any decision we make. This includes financial decisions, such as whether to “spend” or “save”.

In fact, it’s easy to think of spending and saving as dichotomies. But like almost anything in life, we don’t live in black and white. We live in shades of grey.

Investing in financial assets isn’t the only way to invest.

And for younger people in particular, you’re likely to get better returns by investing elsewhere.

For one thing, most people in their teens and twenties are likely to benefit enormously from investing in themselves: in their education and professional development.

Over the long-run, I’d put my money on someone who spent intelligently on education than someone who put this money into managed funds.

From a financial perspective, young people are likely to get a much better return than 10% from their investment in education. And on top of this, it can’t be taken away from you.

It can also enrich your perspective on life. And that’s where I think this money-moral-panic gets more myopic.

I’m all for making sacrifices, if they’re in pursuit of what really matters to you, and these decisions reflect your values and priorities.

But saving for the sake of saving and maximising your long-term financial situation is a narrow way of thinking about things.

Saving is important. But it needs to be seen within the broader picture of your life.

As a young person, with less commitments than you’ll have in the future, it’s valuable – and dare I say it, important – to explore.

Frankly, I don’t think your savings rate is likely to be nearly as important as spending some time on building a social circle and settling down with the right person or people.

There’s a time and a place for optimisation, including optimising your savings rate. But I’d argue that your youth isn’t the time to do it.

Below is an updated version of the 5% chart that includes an additional line. It reflects a scenario that I’d argue is more “normal” and in line with the story of most people’s lives.

The grey line follows the life cycle of someone who borrows money to go to university; starts on a low income that doesn’t allow for much savings; who sees their financial fortunes improve as they couple up and start making headway in their career; who experiences some financial doldrums (but wonderful experiences) as they become a parent (with reduced income and increased expenses); before settling down, making further headway in their career; repaying their mortgage, and accelerating their path to building wealth in the later years of their career.

Compound interest starts to work for them as they go through their life cycle. And it’s predicated on the hard work and good decisions over the course of their life.

A simple narrative, or chart (or table), misses the richer story of your life. It forgets the compounding benefits you receive from investing in yourself, your relationships, and your physical and mental health.

Make the decisions that are right for you, with an eye to the long-term future and what matters to you.

Ignore what pundits say you “should” be doing.

Compound interest is powerful, and it’s beautiful. But it doesn’t just relate to investing money. It relates to almost everything you do in life.