The future is uncertain.

This fact shouldn’t stop us from planning for the future. But we need to plan with an appreciation for this uncertainty.

In terms of planning for retirement, for example, many people have no idea when they’ll retire.

I’m 37, for example, and I can’t tell you if and when I’ll retire – to the nearest decade. I’ve said I want to die with my boots on, but that could change. Also, although I may not retire per se, I might significantly cut down my professional commitments at some point which might represent something of a retirement. Or my health or other circumstances may force me to retire. I could guess – and say it might be somewhere in my mid- to late-sixties. But it’s only a guess.

Even if you know when you’ll retire, there are a lot of uncertainties:

It’s that final uncertainty I want to pay some attention to.

At the moment, NZ Super is essentially universal. If you meet the basic eligibility requirements (relating mainly to whether you’ve been resident in NZ during your working life), you get the full amount when you turn 65 regardless of your asset position or income from other sources.

But let’s take my situation. I’m 37. As things currently stand, I’ll be eligible for NZ Super in 28 years’ time when I turn 65. Let’s assume my wife and I are exactly the same age and that we expect to retire at 65, be healthy, and have many years ahead of us.

We expect to have paid off our home by the time we turn 65. We also expect to have a number of investments inside and outside of KiwiSaver. Let’s assume that we can expect to generate an after-tax, inflation-adjusted return of 2% (calculated annually) on these investments throughout our retirement.

Let’s also assume we want to sustain a retirement lifestyle of $1,000 per week (in today’s dollars), or $52,000 per year. We want to ensure our capital sustains us until we reach the age of 100. If we’re still around at that point, we’ll look at drawing against the equity in our home in some way.

The $64 million dollar question is:

How much will we need when we retire?

Given all of these assumptions, the biggest factor that will influence this answer is whether and when we’ll be eligible for NZ Super, and what the level of NZ Super will be.

If I assume that we’ll be eligible for NZ Super of $32,000 per year (roughly what a couple receives now), we would need a nest egg of $499,972 to to supplement NZ Super over the course of 35 years. (Note that all figures in this article are in today’s dollars.)

Our nest egg will decumulate as follows: 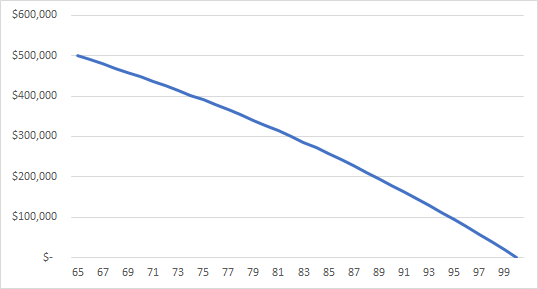 This is what most people retiring today can expect to do.

(And sure – some people want to live off the interest, in which case, at a real return of 2%, you’ll need a nest egg of $1 million. That’s great for your kids or the causes you support, but you could get away with a higher quality of life if you drew down on the capital.)

But do you want to see something scary?

This is the same chart, except we assume that NZ Super won’t be there for us: 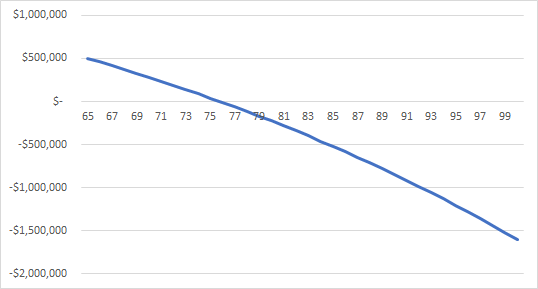 We run out of capital by the time we turn 76. Instead of sustaining us for 35 years, that same lump sum sustains us for 11 years.

The amount we’d need to sustain the same quality of life without NZ Super would be $1,299,928: 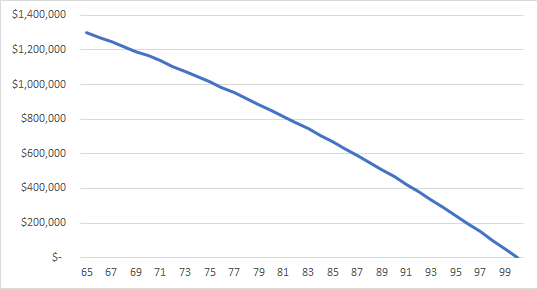 (If we wanted to live off the interest, the amount we’d need is $2.6 million.)

Perhaps that’s too drastic. Maybe NZ Super will still be around, but it will look different. For example, until the Labour government came into power, my wife and I weren’t going to be entitled to NZ Super until the age of 67. If this were the case, our decumulation would look like this:

Or, let’s say NZ Super became means tested. This could happen in any number of ways.

Alternatively, NZ Super could be means tested on a more graduated basis. Let’s say people with investment assets of $100,000 or less receive the full amount (still $32,000), and anyone with more than $1 million don’t receive it at all. People with nest eggs of between $100,000 and $1 million receive NZ Super on a pro rata basis (ie, receiving proportionally more NZ Super as their nest egg gets closer to $100,000). This being the case, our nest egg would need to be $801,498:

There’s a huge amount of uncertainty here. There’s no way of knowing what NZ Super will look like in 28 years’ time. So we just need to accept it and manage it.

This is a case where Government policy will have a direct impact on our lives. For one thing, it means that I encourage younger people to save more than they might need. At the very least, it will give them a lot of options as they get older if NZ Super doesn’t change substantially – like retiring earlier, or enjoying a higher quality lifestyle than they otherwise expected. It may also impact decisions about when to retire and what type of lifestyle people feel like they can afford when they approach retire in several decades’ time.

Opinions about NZ Super vary. Some people think it’s unsustainable in its current form and think eligibility should be delayed or means tested. Some people think it’s a key part of what makes New Zealand, New Zealand – and that even if NZ Super payments take up a larger amount of GDP, the size of the GDP pie will continue to grow and we’ll still be able to afford it. I’ll reserve my thoughts on it for… private conversation, and maybe agitating if and when changes look like they’re on the horizon. (A cop out, I know.)

But here is some context:

* Internationally, NZ is unique to have a superannuation scheme that isn’t means tested. It’s a generous system, relatively speaking. If I were to put money on NZ following the herd or the herd following NZ, I’d probably bet on the former. But who knows?

* The other side of this argument is that idea of providing people with a Universal Basic Income (UBI) is becoming popular. NZ Super is essentially a UBI for people over 65. Conceivably, NZ Super could expand rather than retract.

* There’s a saying that “demographics is destiny”. The proportion of people over the age of 65 to people between the ages of 18 and 65 will increase over time. As a proportion of GDP and Government income, the cost of NZ Super will increase fairly substantially – as well as medical costs associated with an ageing population. When faced with a decision of whether to reduce costs or increase taxes, it’s pretty common for Governments to reduce costs (ie, reduce benefits such as NZ Super). [My father-in-law points out that the proportion of over-65s still in the workforce – and paying taxes – continues to increase: he tells me that in 2001 the figure was 11.4%, increasing to 16.8% in 2006 and 22.1% in 2013. He also points out that a large portion of these workers are high-earning – and high tax-paying – managers and professionals. Source: my father-in-law.

* There is something strange about providing generous superannuation benefits to wealthy Kiwis who don’t need it, when this money could go on other things such as health, education, and infrastructure. For example: does Winston Peters really need NZ Super? When John Key, with his estimated wealth of $50 million, turns 65, should he receive the same benefit as someone who has nothing? On the other hand, these wealthy people have probably paid a fair amount of tax already. Also, means testing NZ Super would create unusual incentives (perhaps discouraging people from saving or working beyond the age of eligibility), and distortions (for example, wealthy people finding esoteric ways to structure their assets to get these benefits – at $32,000 per year for a couple, it’s worth paying professionals to maximise these benefits)

* Even the solution to increase the age of eligibility has its issues, in the sense that it can indirectly favour people who are wealthier (and tend to live longer) over people with a lower socioeconomic status and/or who have had to work more physically demanding roles throughout their working lives.

I’ve only scratched the surface. The key message doesn’t relate to any of these points (or the many points I’m missing). The key point is that I don’t know what will happen in relation to NZ Super.

If you’re young, your eligibility for NZ Super, and the level of NZ Super you’ll receive, is a question mark.

Like many other uncertainties, it’s one you need to acknowledge and plan around.