TLDR: High-level thoughts. Less relevant to any specific decision, but more about the lenses through which we see the world, which can in turn inform our decisions.

In the last year or so, something weird has happened. I’ve become an optimistic person.

This is weird for many reasons, including:

In this article, I want to reflect on why my thinking has shifted.

In the past few years, I’ve been thinking a lot about existential risk.

Below is a chart from an unscientific sample of two dozen people, when asked about the probability of humanity suffering an existential threat in the next 100 years. 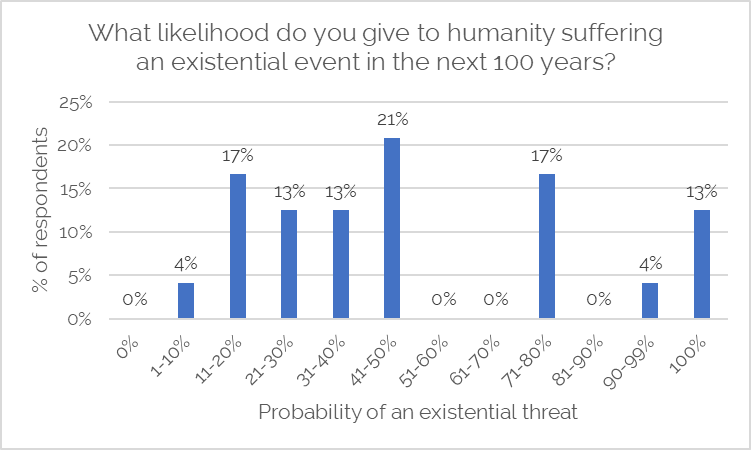 (Source: people who have provided feedback in relation to this blog, and participants of Stealth Wealth. I’ve spoken with most of these people and they are all intelligent, thoughtful, charming, and good-looking.)

Not a single person from this ragtag sample thinks there is a 0% chance, and only a sliver think it’s very unlikely. 13% of thoughtful people think it’s virtually certain.

For reference – I sit around the 14% mark. This seems to make me optimistic compared to this reference group – although when I weigh the consequences, in terms of lives lost and lost potential, it’s waaaaaaaaaaay higher than I’d like it to be.

Why is my figure so specific? It’s borrowed mainly from Toby Ord’s assessment in his masterpiece, The Precipice, adjusted downwards for the pandemic-related reasons given below. When the book was published, Ord gave a 17% (1 in 6) probability, based on a systemic assessment of the major risks we face.

Thinks could be terrible. But they could be great, too

A 14% percent change of an existential event in the next 100 years is way too high. We can’t eliminate the risk, but I think it’s worth investing more resources as a society to make this less likely – and accepting some strategies that might not seem palatable to many.

Having said that, a 14% likelihood of something bad happening suggests there’s an 86% probability it won’t happen! That’s great.

Let’s step back and make some wildly general, massively over-simplified scenarios for our collective future:

My personal guess is that the most unlikely scenarios are:

I’m not saying they won’t happen – there’s a good chance they will.

Unfortunately, I think the risk of a more dystopian future is high (~25%) (I’m still something of a pessimist!).

But I think the most likely scenario is that the future will be significantly better than what it is now (~40%).

I’m a Bayesian at heart, trying to recalibrate my predictions (priors) based on new information and perspectives coming to light.

Here is where I’ve changed lately, and shifted more towards optimism:

The truth is usually better than the nightmare. Things often end up being less scary once you look at them head-on.

Simply put, these risks aren’t so amorphous any more. I have a framework for thinking about them (derived mainly by studying Ord’s book, but also from other resources like Josh Clark’s excellent podcast series “The End of the World”). For example, I now think in terms of natural risks (such as asteroids or comet impacts, supervolcanic eruptions, or stellar explosions), in contrast to anthropogenic (human-created) risks.

It’s the anthropogenic risks that scare me. Nuclear war, environmental damage making Earth inhabitable, unaligned AI, and engineered pandemics. It’s only in the past 100 years or so that we’ve developed the means to make ourself extinct.

From an existential risk perspective alone, I think we are in the most important century of our history. My sense is that we’ll get through this period, and work out how to manage these risks more effectively, or we’ll fail to get through the great filter.

You can’t short the apocalypse

There are different ways of managing risks. You can avoid them, reduce their likelihood, mitigate their potential impact, and transfer them (eg, via insurance or by sharing risk with others). Sometimes, the best thing to do is to accept a risk.

I’ve come to peace with the fact that my personal plans for the future are predicated on the fabric of society being maintained. If we stop living in a society with rule of law, then all bets are off.

I’m happy to be prepared for minor disasters, but I’m not going to be a prepper. It’s a single decision that has removed lots of decisions. Making this decision has taken a weight off my shoulders.

Some of my priors have changed

Of all of the anthropogenic risks that scare me, the big one is a pandemic, and an engineered one in particular. This was even before COVID-19.

As bad as COVID-19 has been, it could have been much worse. I’m adamant we dodged a bullet.

I wish COVID-19 had been addressed more effectively. But there are some causes for celebration. One of these was how quickly multiple vaccines were developed and made available.

Another is that the economy was more resilient than I thought it would be. My concerns about supply chain issues were possibly overblown. (This isn’t to discount all of the hard work that went behind the scenes by people to make sure that supply chains didn’t fall over any more than they did.)

Additionally, many of us were able to continue to adapt and be productive. This is likely to become even more the case as time goes on. In fact, the past couple of years have probably accelerated trends to make this happen.

I think the speed of vaccine development has had the biggest impact on me. To quote Patrick Collison’s description on his list of “examples of people quickly accomplishing ambitious things together”:

“On January 10 2020, the SARS-CoV-2 genome was published. 3 days later, Moderna finalized the sequence for mRNA-1273, its mRNA vaccine candidate; the first batch was manufactured on February 7. On February 24 (45 days after genome publication), Moderna shipped the first batch of mRNA-1273 to the NIH for use in their Phase 1 clinical study. 266 days of clinical trials and regulatory coordination followed. On November 16, Moderna announced that the vaccine's efficacy was 94.5%.”

This has given me a sense of optimism in two respects:

I’ll admit: some of my priors have changed for the negative. I’ve become more aware than ever that disparities exist, and I’m less confident that these will be addressed as adequately and quickly as I’d like. My faith in certain types of people, and certain aspects of humanity, have also been tested. But these are outweighed by the other factors.

Things could really get better

Lately, I’ve read some really compelling articles about how the future could get significantly better.

Historically, I haven’t been able to buy into the arguments of optimists like Ray Kurzweil or Peter Diamindis, nor Matt Ridley or Steven Pinker.

Funnily enough, one of the most optimistic writers I’ve come across is Toby Ord. For a book about existential risk, The Precipice is an extremely optimistic book.

Ord also has some peers who have made some good arguments, as well. I won’t summarise them, but a couple of really good pieces are:

What if the world gets better?

This is more speculative. But some preliminary thoughts in case things get way better than we think: 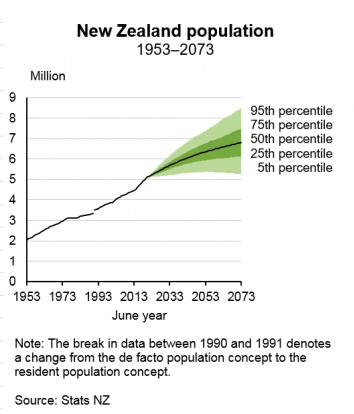 The chart above is sourced from Stats NZ. I’m a little more optimistic than these projections. I think it’s likely that I will see the population reach 10 million people in my lifetime.

Getting an outside view

I am personally more optimistic than I’ve ever have been. In this article I’ve created a partial narrative above that supports my own thinking.

In Thinking, Fast and Slow, however, Daniel Kahneman encourages us to test our “inside view” with the “outside view”.

One way of taking the outside view is by finding proxies for what other people think.

All the better if those proxies involve money. It’s one thing to voice an opinion. It’s another to put your hard-earned cash behind an opinion. As the saying goes, “a bet is a tax on bull$hit”.

Even better if you can find proxies that approximate lots of people’s views. Well-functioning markets are good for this.

Two good proxies for this are:

In the past couple of years, share prices (in general) and the NZ property market have performed well. This is different to what a lot of people might have thought in March 2020, but it is what it is.

The value of a publicly listed share, or the value of a given property, isn’t just about the relevant assets and liabilities, or current or historical level of income and expenses. It’s about confidence – or otherwise – regarding the future prospects for that asset.

If the value of something increases significantly over a short-period of time, that indicates that people are optimistic about its future. Presumably, this includes an assessment about the future in general.

If it’s a market with lots of players, where people have to put their money on the line, then this is indicative of something, whatever my own biases or thoughts on the matter.

To me, these headline figures indicate something. OPTIMISM ABOUT THE FUTURE. This might seem weird in light of everything that has happened over the past 18 months.

This optimism won’t be for the precise reasons that I give, but for some people, there might be some overlap.

(NB. Looking at individual shares or properties, there can be confounding factors relevant to the specific assets in question. Looking at the market as a whole, however, provides a broader indication of sentiment, or optimism, in relation to the future.)

I’m not sure whether what I’ve discussed in this article is compelling to you or not, and why that’s the case. Either way, I’ll make a final note of caution.

Truth be told, I hold onto this commentary pretty loosely. The weighting I give will change based on the day we speak and the time of that day.

I don’t have a crystal ball, and I EXPECT that some of what I say will be wrong in some fundamental way. You should take what I say about the future with a grain of salt. I do. At the very least, my probability assessments will change.

It’s also worth noting that my personal sense of optimism may be a post-hoc rationalisation, linked to feeling more settled in personal financial situation and the stability and trajectory of Fairhaven Wealth as well as my wife’s career. (If anything, I wonder if, like many other households, we are over-confident after COVID-19.)

It may even be more mundane this has. My optimism has coincided with becoming a teetotaler. Perhaps alcohol truly is the thief of tomorrow’s happiness (~optimism).

I am also not saying that there won’t be a significant drop in the share market, and/or the property market. For one thing, optimism and pessimism about the future can and will change. There can be all sorts of other, specific, interacting reasons for all of these things.

When making big decisions, it pays to contextualise these decisions within a bigger picture of what the long-term future. Nothing is an island. All big decisions are a confidence game in one way or another.

It turns out, that I’m a lot more optimistic, and confident about the future, than I ever have been. This has been informing quite a few big decisions in 2021. They’re not the sort of decisions I’d have made in the past, but I’m confident (optimistic!) that they’ll pay off.

(... he writes from Christchurch, near the end of October 2021, before local community spread of COVID-19, and before his children have to be schooled from home, any day or week from now...)

Other reading or listening