Read the small print of any decent investment offering, and you’ll see something to the effect of “past performance is no guarantee of future performance”.

This chart represents the returns of a 117 different $1 million portfolios with no withdrawals over the course of 30 years. Each line represents historical outcomes for the same portfolio (to the extent possible), with an allocation of 50% each between equities and fixed interest.

I discuss it in more detail in this article from last year. My point is that there’s no way to predict exactly how your investments will perform.

You might be able to take some lessons from the past – history may not repeat but it rhymes, after all.  But this isn’t a domain where you can extrapolate into the future with any precision.

Enough about financial assets! What about direct residential property?

I was recently asked by some clients about whether there is similar data relating to property. So I spent some time trying to look into this.

My short answer was no. My hand-on-heart answer was that that I’d need to do a PhD on the topic to give anything resembling a definitive answer (if that was even possible).

Below is my attempt at a slightly longer answer.

In this spirit, I’m not wedded to my thoughts. And I’m VERY interested to hear from anyone who can challenge these comments and/or add nuance to them.

But before I explain, it’s important to acknowledge some important points.

Property data isn’t as bountiful as data about financial assets

With publicly listed shares, information is publicly available and relatively transparent. You can get a sense of share valuations (capital growth) and dividends (income).

With property, you might be able to get a feel for property valuations as reflected by periodic sales. But you’re not going to get any sense of income (rents) and expenses (not just rates and insurance, but mortgage interest, maintenance, and renovations).

I can narrow things down by simply looking at property prices. But it’s missing an enormous part of the puzzle.

And even by relying on property prices, it’s hard to exclude related party transactions such as property being settled into family trusts or sold between family members which doesn’t strictly reflect the “market value” of property as agreed by two arms-length parties.

Stepping back, it’s also worth noting that the housing market isn’t quite as “rational” as the market for publicly listed shares. Robert Shiller, who won the Nobel prize in economics and is also the co-creator of the S&P/Case-Shiller US National Home Price Index which I talk about below, explains why the housing market isn’t “rational” in this New York Times article. (It’s important to note that when Shiller uses the term “rational” he uses it in a specific way – to refer to a market situation where “price” and “value” are exactly the same. To say the housing market isn’t rational isn’t to say that other markets such as share markets are rational; but as he explains in the article, there are characteristics of the property market that make it more likely for “price” and “value” to diverge than, say, large share markets.)

NZ property data only goes back a few decades

Even putting those comments to the side, it doesn’t seem like there’s a lot of data that goes back further than around 1990. In my view this isn’t a long enough period to draw long-term historical conclusions.

REINZ maintains a House Price Index. The October edition of its report is here. The “headline” chart is here: 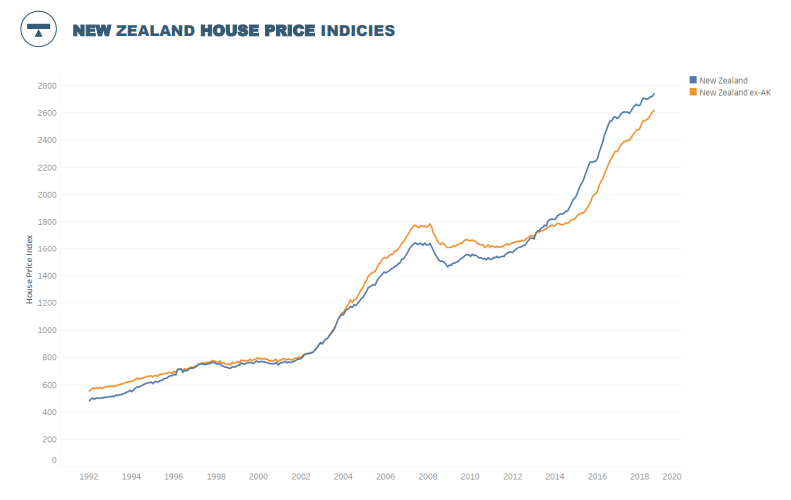 Clearly, since 1992, house prices have increased in value significantly. Arguably, this overstates price increases slightly because the figures aren’t adjusted for inflation. But over this period, property prices property prices have risen substantially higher than the rate of inflation. (For reference, the Reserve Bank’s inflation calculator states that something costing $1 in 1991 would cost $1.71 now.)

The Reserve Bank appears to have data (based on QV data) going back to 1989 (spreadsheet located at https://www.rbnz.govt.nz/statistics/key-graphs/key-graph-house-price-values; I’ve translated this data into the chart below: 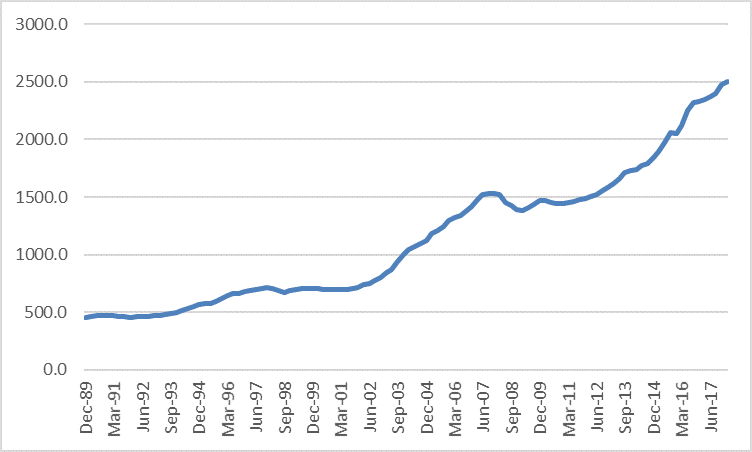 The Reserve Bank/QV data tells the same story as the REINZ data.

(As an aside, I am assuming this data started in 1989/1992 and wasn’t selected because it makes property investment especially favourable. Arguably, they’d have an incentive for this to be the case, although this seems less likely for the Reserve Bank. I say this because being selective about time frames can have a huge impact on how performance looks. For instance, the chart below uses the same Reserve Bank data, but I’ve been selective about the time frame to show a slightly different story to the charts above.

Somehow The Economist has acquired data going back to 1970. It sets out this data, including other metrics such as increases in real terms (ie, inflation-adjusted) and in terms of prices against income and rents. (This is to 2017. I don’t think the data has been updated to 2018.)

Alternatively, you can look at the figures in real terms (ie, adjusted for inflation). This time, I’ve also included US data for comparison:

But I think it’s valuable to contrast the NZ story with the US story.

How does this compare to the US?

The US, on the other hand, has the Case-Shiller index, which uses data going back to the nineteenth century. This was co-created by Robert Shiller, the Nobel prize winner I’ve mentioned already. The Wikipedia page talking about this index is here.

The following chart, which I’ve taken from Wikipedia, shows the “real” (ie, inflation-adjusted price) of property from 1890 to 2018.

The most striking thing about this chart is that if you exclude the period since the 1990s, property prices haven’t increased much in inflation-adjusted terms.

The last 30 years are a bit of an anomaly. Which, coincidentally, is the time frame we have for NZ data.

If you go back to the previous chart from The Economist, you’ll see that NZ property prices have increased at a faster rate than US prices.

At the very minimum, it makes me feel very cautious about extrapolating future trends from the NZ data, which is from the last 30 years or so.

Even if you were inclined to look at property returns relative to share performance over this time frame, there’s a strong argument that shares have out-performed property. Nick Carr from Your Money Blueprint recently wrote a good article making this point.

What is missing from this analysis?

Some factors that are missed from all of the above:

I think you’d need to do a PhD on the topic to be able to say anything definitive. I’m open to being challenged.

But for me, the biggest flag for me is that the past 30 years in the US has been anomalous when it comes to property prices – and the last 30 years is all we’ve got in New Zealand.

I don’t have a crystal ball and don’t pretend to know what the future holds.

But I’m very conscious that past performance is no guarantee of future performance – especially when it comes to property.