Regret is a creative act. Channel your creativity and imagination for good!

It's human to experience regret.

In the context of personal finance, most of my clients express regrets about financial decisions they’ve made in the past.

Sometimes these regrets relate to what they’ve done, such as investments that worked out badly. (Usually these relate to businesses or property.)

Just as often, these regrets relate what they didn’t do, such as investments they didn’t make.

It doesn’t take much imagination to come up with something to regret. As I write this, the following examples* come to mind:

Some people are better at imagining scenarios like this than others.

Some people dwell and ruminate over these sorts of scenarios more than others.

It’s not hard to frame it so we all have regrets in life, especially when we think of the universe of options that have been available to us.

Channel your tendency to think of counterfactuals

I’ve historically had a tendency to think in terms of counterfactuals or what-could-have-beens. In most scenarios I’d have ended up in a worse position than I am currently in now. “There but for the grace of God”, I’d think.

More than anything else, I put this down to a single insight: this tendency to think in terms of counterfactuals doesn’t have to be a weakness, but can be a strength if channelled properly.

Tim Urban of Wait But Why illustrates this well: 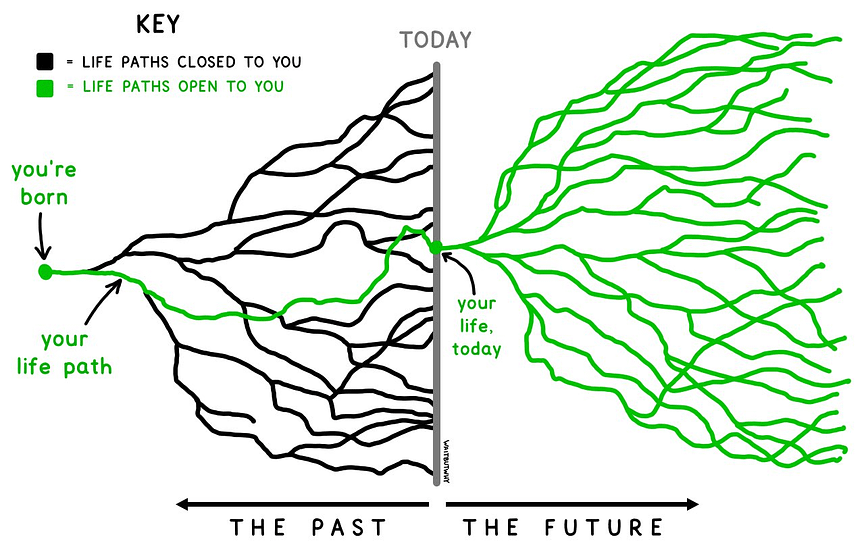 Beliefs and strategies for managing regret

I’ve observed some commonalities among clients who are more sanguine about past decisions than others. Employing these beliefs and strategies has also worked for me personally.

There will always be “best case” scenarios that we miss out on. As Arthur Miller wrote, “all one can do is hope to end up with the right regrets”.

Accept that everyone makes “mistakes”, ourselves included.

Even the most “successful” people in the world aren’t successful all the time. The Beatles wrote some bad songs. When he ran Microsoft, Bill Gates made some bad commercial decisions.

If we had a fully-functioning crystal ball, we might be able to avoid mistakes. Without a crystal ball, however, we have to accept that we don’t have perfect foresight, just like everyone else. We will all miss opportunities.

Judge decisions based on the information available at the time.

Almost everything seems obvious in retrospect. It’s easy to judge decisions, and feel regret, when you have the benefit of hindsight. However, these feelings are often driven by a distorted idea of what we thought and felt at the time of the decision, influenced largely by our subsequent knowledge.

I have found this useful for myself, in several respects.

Living is a creative act. Be creative in useful ways.

If you’re going to focus on the past, you can’t change it. Use your considerable imagination and creativity to reframe the narrative, and make it empowering (a learning process) rather than something disempowering (regret to wallow in).