Various thoughts springboarding from what has happened (and is happening) regarding FTX/Alameda and Sam Bankman-Fried (SBF). I’m assuming you have some knowledge of the situation – if you don’t, this article won’t have any interest to you. I've written/formatted quickly.

“From compromised systems integrity and faulty regulatory oversight abroad, to the concentration of control in the hands of a very small group of inexperienced, unsophisticated and potentially compromised individuals, this situation is unprecedented.”

The key lesson for me is that I need to be less credulous and even more sceptical of high-profile people. Not in the sense that I shouldn’t trust, but that I should add more weight to the “verify” part of trust-but-verify. This makes me sad.

Basically, that there needs to be more scrutiny and criticism in the financial world. “Yes, and” is a good rule in improv, but that doesn’t mean it’s the same rule in other domains. If social science is suffering from a replication crisis, then there must be many other fields where bad takes and rotten incentives aren’t being kept in check as well as they should. Money is no exception. 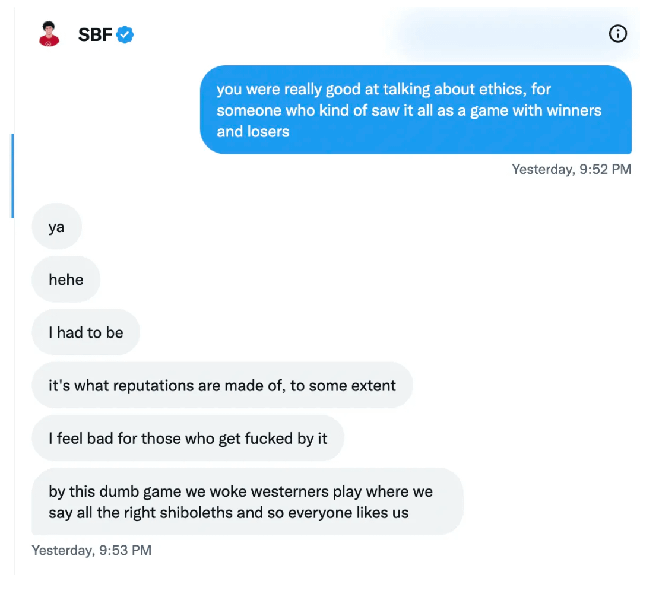 My presumption with anything SBF says, going forward, is to be on high alert no matter how persuasive his statements are.

“80000 Hours published an article in 2017 (which has had some updates in 2022), which estimates that $1-10 billion is spent on nuclear security, $1 billion on extreme pandemic prevention, and $10 million on AI safety research. / Admittedly, I think these figures are underestimates because they don’t include significant commitments made in recent years by the likes of Sam Bankman-Fried and the married couple of Dustin Moskovitz and Cari Tuna. Covid has also prompted Governments to put more money towards pandemic preparedness – although not as much as I’d probably guess.”

... which means I’m partially at fault for helping to launder his reputation. I talked about SBF making “significant commitments” in relation to these areas. Technically, that is correct – he had made commitments, but I don’t believe he had actually put much money towards these causes.

The case for killing the trolley problem (or letting it die) by Barbara H Fried. My takeaway: "trolley problem"-like hypotheticals are interesting, and can be revealing. But they are narrow and can distract us from more important moral concerns. For example: how do we avoid getting into trolley problem-like situations in the first place? (Fun fact: Fried is the mother of 30-year-old billionaire Sam Bankman-Fried, who appears to have applied his mother's consequentialist way of thinking to the extreme – he founded FTX, a cryptocurrency derivatives exchange, with the primary intention of "earning to give".)

I don’t think SBF’s actions influence detract from the work of other people. This includes the work of his parents – both of whom are Stanford Professors – and their research on legal philosophy (his mum) or tax policy (his dad).

Nor do I think that SBF’s actions detract from the arguments put forward by philosophers like Will MacAskill, such as those in Doing Good Better or What We Owe the Future. (For what it’s worth, I personally don’t think “long-termism” is particularly at odds with “short-termism” or “medium-termism” – what is good for people now is likely to be good for future people. Either way, for instance, we want to avoid existential events.

COWEN: let’s say there’s a game: 51 percent, you double the Earth out somewhere else; 49 percent, it all disappears. Would you play that game? And would you keep on playing that, double or nothing?

BANKMAN-FRIED: With one caveat. Let me give the caveat first, just to be a party pooper, which is, I’m assuming these are noninteracting universes. Is that right? Because to the extent they’re in the same universe, then maybe duplicating doesn’t actually double the value because maybe they would have colonized the other one anyway, eventually.

COWEN: But holding all that constant, you’re actually getting two Earths, but you’re risking a 49 percent chance of it all disappearing.

BANKMAN-FRIED: Again, I feel compelled to say caveats here, like, “How do you really know that’s what’s happening?” Blah, blah, blah, whatever. But that aside, take the pure hypothetical.

COWEN: Then you keep on playing the game. So, what’s the chance we’re left with anything? Don’t I just St. Petersburg paradox you into nonexistence?

BANKMAN-FRIED: Well, not necessarily. Maybe you St. Petersburg paradox into an enormously valuable existence. That’s the other option.

I remember listening to that and thinking, “hmmmm. I need to think about that more”, and then leaving it at that. This whole thing has hardened my views: if you care about existential risk, then there’s no way you’d take the 49% chance of extinction in order to double total utility.

For one, if you’re investing a lot of money into crypto, you shouldn’t be using an exchange. You should be holding it yourself: “Not your keys, not your crypto”. If you weren’t familiar with this concept, and historical precedents illustrating why this is important (eg Mt Gox), you probably haven’t done enough due diligence on the asset class.

An exception to this: people who were having their money managed by professional managers. I feel really bad for them. I feel quite a bit of antipathy towards any managers who were responsible for other people’s money, and invested via an exchange.

Full disclosure, however: the small amount of crypto I own is held on a exchange. However, the amount is minimal – a $20 initial investment in Ethereum which is currently worth around $6. For what it’s worth, I used Coinbase because it was based in the US, where I presumed regulations would be higher, and it is publicly listed in the US, which also means it is subject to higher scrutiny. But even so, I made the investment with the knowledge that this was a significant part of the risk relating to my investment, and if I’d added a few zeroes to my investment I wouldn’t have done it via an exchange.

If you’re investing in crypto, my hope and expectation is that you’re doing it with money you can afford to lose. Or at least, you shouldn’t have been. Of course, I can say that with hindsight, but I think any reasonable person would have said that. My hope and expectation that most of the money invested on FTX wasn’t money that was essential to people’s financial futures. In this sense, billions of dollars of lost wealth on a crypto exchange isn’t as heart-breaking compared to billions of dollars lost on an, say, an exchange holding publicly listed shares.

My initial intuition was: where were the grown-ups?? If there is $1.8 billion of funding in the course of just two years, you would expect due diligence. How could an organisation like Sequoia not have the time or resources to do due diligence? (It was able to to spend the resources to do a long-form hagiography of SBF (deleted by Sequoia, but available via the waybackmachine)).

However. This is a case of incentives.

If Sequoia was a “normal” fund manager, like the ones we are most familiar with in New Zealand, which focus on building a portfolio consisting of publicly listed companies and other financial instruments such as bonds, then they might be worried about breaching the fiduciary duties they had to their investors.

However, with VC, the modal outcome is failure. The idea is that you’ll strike out more often than not, and the important thing is to hit home runs. Sometimes, you need to take massive swings. And when there is an attractive business that is run by someone with the right pedigree (SBF) that needs funding, in a competitive market there will be lots of other VCs who will find the investment compelling as well. You need to make some concessions, and one of these will be due diligence.

(My understanding is that there is a cottage industry of grifters who seek to gain funds from VCs and angel investors, taking advantage of this dynamic. Eek.)

To the extent that I was sceptical before, I am becoming more so – bordering on cynical. Ultimately, these decentralised ledgers are simply databases – with some advantages, but also some significant disadvantages. A lot of the time a centralised database can achieve the same thing as a decentralised database, and do so much more efficiently and effectively. There will be some terrific use cases for decentralised databases but the fact we still haven’t seen many is telling. “Magical internet beans” is now part of my vocabulary. (I could be wrong.)

The probability of heavy-handed regulation has risen, and it will probably happen sooner than later. This is likely to reduce the potential utility of web3 assets.

I believe it’s much harder for an institutional investor to justify holding web3 assets, or to invest in a company that is involved in web3. Institutional money often drives large investment markets, and that doesn’t bode well. 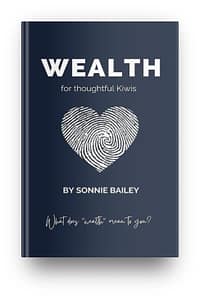