The median is not the message

One of my best friends was recently diagnosed with lung cancer.

Among other things (including reevaluating my own life and my values and priorities), this prompted me to re-visit an article by Stephen Jay Gould, titled “The Median is Not the Message”.

Gould tells the story of being diagnosed with “abdominal mesothelioma, a rare and serious cancer usually associated with exposure to asbestos”. One of the first things he read was that “mesothelioma is incurable, with a median mortality of only eight months after discovery”.

How would you respond if you’d been diagnosed with an illness, and the median mortality rate was eight months?

“I suspect that most people, without training in statistics, would read such a statement as ‘I will probably be dead in eight months'”.

Before I read this article, I may have been the same.

But that’s not the smart way to think about it:

“When I learned about the eight-month median, my first intellectual reaction was: fine, half the people will live longer; now what are my chances of being in that half. I read for a furious and nervous hour and concluded, with relief: ****ed good. I possessed every one of the characteristics conferring a probability of longer life: I was young; my disease had been recognized in a relatively early stage; I would receive the nation’s best medical treatment; I had the world to live for; I knew how to read the data properly and not despair.”

He then talks about the distribution of variation:

“I immediately recognized that the distribution of variation about the eight-month median would almost surely be what statisticians call “right skewed.” … After all, the left of the distribution contains an irrevocable lower boundary of zero (since mesothelioma can only be identified at death or before). Thus, there isn’t much room for the distribution’s lower (or left) half – it must be scrunched up between zero and eight months. But the upper (or right) half can extend out for years and years, even if nobody ultimately survives. The distribution must be right skewed, and I needed to know how long the extended tail ran – for I had already concluded that my favorable profile made me a good candidate for that part of the curve.

The distribution was indeed, strongly right skewed, with a long tail (however small) that extended for several years above the eight month median. I saw no reason why I shouldn’t be in that small tail, and I breathed a very long sigh of relief.”

In other words – when we hear someone talk about an “average” figure, it often doesn’t tell us much. We often think of a normal distribution, where there is a central figure, and everything surrounds the mean/median in a symmetrical fashion:

And there are other variations, including, for example, bimodal distributions: 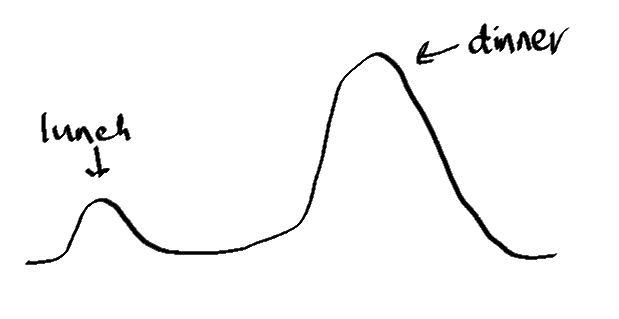 An example includes peak restaurant hours (lunch and dinner). Perhaps the classic example of this is where we measure the heights of a random sample of adults. The heights of women will peak around one point, and the heights of men will peak around another. If we separated the two, the distributions would be modal and would resemble a normal distribution. Other examples include book prices (soft copy, hard copy; in fact book prices may even be tri-modal now, with electronic copies being a separate price point). In some cases, income distributions within certain professions can also be multi-modal.

Alternatively, the distribution could be all over the place, with no real rhyme or reason.

Knowing a single data point doesn’t tell us much about the bigger picture. Sometimes, we’re not even given that much information – for example, when someone says “average”, do they mean “mean” or “median”?

Of course, this doesn’t just relate to medical diagnoses. Some examples that relate to money or retirement include:

If there’s one thing I’d like you to take from this article, it’s to remember that the median is not the message. And if you’re ever in a situation where you’re given a simple figure like a prognosis for an illness that you or a loved one are diagnosed with, that you should step back and give some thought to what your situation might be.

In my friend’s situation, for example, the 5-year median mortality rate for someone at his stage of lung cancer isn’t great. But consider: