What will the world look like in 2050? How will it be different to today?

Lately, I’ve been a little preoccupied with that question.

The reason I’ve been thinking with this timeframe in mind is because, with any luck, it covers some of my most productive years – my 40s, 50s, and 60s.

This article lists a bunch of things that I think are likely to occur during over this timeframe. (There are some big disclaimers! For example, some of these predictions will be wrong! My track record isn't great! This isn't comprehensive! More disclaimers are at the bottom.)

While going through this exercise, I've been asking myself:

As well as thinking about what you would add to this list, and how your views differ from mine, I encourage you to ask yourself: how do you fit into all of these changes?

The economic pie will get bigger

Material wealth, as measured by GDP per person, will continue to rise in countries like New Zealand. This is despite a lot of the challenges we’ll face, such as climate change. 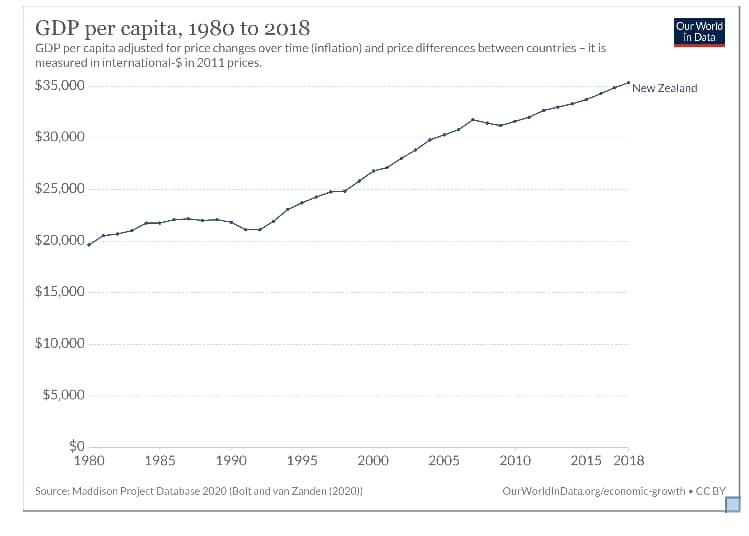 I suspect this underestimates the change: the increase is likely to be exponential, not linear.

Even this is probably underestimates quality of life, because a lot of the best parts about today aren’t necessarily measured by economic measures like GDP. Wikipedia is free and better than any expensive encyclopedia set available when I was a teenager (IMO). Some industries will become less economically valuable in terms of the total income the products or services they generate (such as financial advice...) but that will reflect the fact that consumers don’t need to spend as much in order to get better outcomes. These things don’t show up in these measures. The same will be even more true in the future.

This trajectory won’t be a straight line. There will be ups and downs and uncertainties all over

Life expectancy will continue to rise

Life expectancy has increased steadily since I was born: 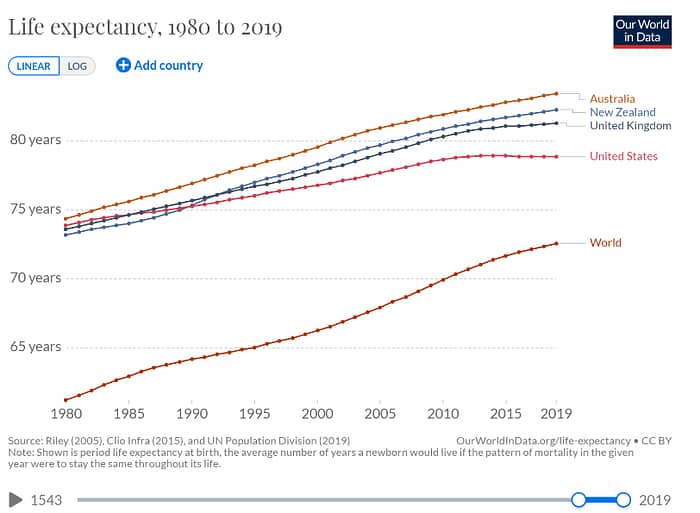 We will live longer, and there will be more prevention and treatment of illnesses that we take for granted. Consider how quickly Covid vaccines were created. The benefits of advances like CRISPR are just beginning.

(This motivates me to want to stay healthy for as long as possible, so I can outrun the demon of age-related health issues. The longer I live, the more interventions will be available.)

Stats NZ’s 2020 population forecasts are below. The 50th percentile estimate is that our population will be just below 7 million around the time I’m in my early 90s. It’s highly unlikely that New Zealand’s population will decrease. 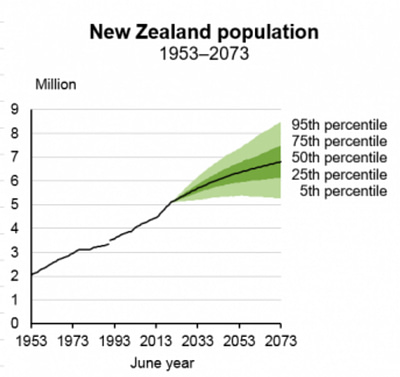 There will be less absolute poverty, but increasing economic inequality

I think there are too many factors at play that will drive inequality. There will be less absolute poverty (ie, people who can’t meet their basic needs), but more relative poverty (more people just getting by, relative to people who are thriving economically).

I think Suzanne Collins had it right in The Hunger Games series of books. Not the Hunger Games part, and not the relationship between the wealthy Capitol and its surrounding districts. But within the Capitol. In the world of The Hunger Games, many Capitol citizens are up to their eyeballs in debt. Even if they disagreed with the system they benefit from (relative to the districts), their situation would be too precarious to speak up. This is something that can be self-reinforcing, and concerns me: there will be a smaller group of people with the financial freedom to push their agenda, but many or most people will be dealing with their own issues and have less bandwidth to promote the change they want.

The climate will continue to change, on average for the worse

Whether average temperatures increase by 1 degree or 3 degrees, extreme weather events will become more common and ocean levels will rise. The most likely scenario is that wealthier countries will fare much better than less-wealthy countries. However, even the most wealthy nations will be inconvenienced.

(I don’t think climate change is “existential” for humanity in any real sense, although it will increase the probability of other existential threats due to economic and geopolitical tensions. To be clear: I believe in anthropogenic climate change, and I think that every 0.01 degree increase in temperature we can avoid is good. I support many policies directed at reducing the impact of climate change. I’ve also made concrete steps in my life to reduce my climate footprint and I encourage others to do the same.)

Immigration is likely to be a significant global issue

Lots of people will be forced to leave their homes for a variety of reasons, many of them prompted by changes in climate or consequences of climate change. New Zealand has largely been immune from this issue, but it will become a bigger deal even in New Zealand..

Technological change will be immense, and this will have huge implications on how we live

We will get abundant, cheap, guilty-free energy

The prospect of abundant, cheap, and guilt-free energy is mind-blowing. I never really grokked this fully until we recently installed solar panels on our home. For all the bad that is going on in Ukraine, and without dismissing what Ukrainians are going through, I suspect that a silver lining is that it will encourage large nations to expedite this transition to abundant, guilt-free energy, so we get there 5 to 10 years earlier.

A clear sky will be a thing of the past: it will be littered with flying objects

This will mainly be drones, making deliveries. Even rural areas will be able to access items relatively easily.

We will eventually get self-driving cars, at least in some areas

Transport is going to change radically. In the same way that cars allowed for suburbs and malls, I think self-driving cars will make others changes. For example, there is likely to be more demand for ex-urbs.

(By "extended reality" (XR), I am talking about a combination of virtual reality (VR) and/or augmented reality (AR).)

In particular, people will be able to meet in extended reality and get a genuine sense of presence in these interactions. There will be an increasing number of people who spend most of their workdays in XR.

A lot of people will want to live more remotely

This is likely to be a result of much of what I’ve talked about above, such as self-driving cars, convenient air delivery, and extended reality making geographic distance even less significant.

I’m not sure whether having a basic 3D printer in the home will be the norm, but on-demand 3D printing with fast turnarounds will become a lot more popular and mainstream.

We’ll still eat – I don’t think something resembling Soylent will become the norm. But There will be different varieties of food.

Consider fruit. See what watermelon, banana, carrot, and corn looked like before we domesticated them. When I was young, Kiwifruit was green on the inside and furry on the outside; the idea of red or gold Kiwifruit with smooth(ish) skin seemed weird. My favourite type of apple, the Ambrosia, didn’t exist until the early 90s, and wasn’t even sold in New Zealand until 2008. We’re likely to see mushrooms that don’t brown, wheat that can be eaten by people with coeliac disease, sweeter-tasting strawberries, and seedless tomatoes. Stoneless avocados already exist! (With edible skin!) CRISPR and related technologies will probably speed up the rate of new fruits and varieties of existing fruits.

In doing so, we’ll accommodate to these changes pretty rapidly. They will impact some people and industries significantly. But most changes will be incorporated into our day-to-day lives without little fuss.

Instead of making specific forecasts, let’s think of what is currently out there. Let your imagination about the possibilities for the future run wild. Computers can already:

Another thing that computers can do is converse with people. Chatbots haven't historically been very good. But they are getting better. And my guess is that they will get really good, really quickly. (I also suspect that people will also be more willing to share personal information with computers than other people. But that's just a hunch.)

In 2019, I explained that I wasn't afraid of roboadvice. Based on the developments of the past three years, my priors have changed. I'm not afraid of roboadvice, but that is more because I anticipate the change and I'm making sure it won't be "existential" to my ability to create value for other people. But I think it's on the way, and it's going to happen faster than many people in the industry think.

The truth is, I think the limitations aren't going to be technological. The limitations will be that all the money that will go towards developing roboadvice will be organisations that see it as a product distribution channel, rather than a tool for providing high quality advice. But it will happen.

What's the case for you?