Economic growth is an upper limit on property prices

There are two main ways to make money when you invest in property: income (such as rent) and capital gains.

Broadly speaking, income yields from property aren’t spectacular at the moment. Especially once you consider the risks involved with investing in direct property (illiquid, undiversified investments).

I’m going on a limb here, but I believe most people who invest in property do so with the primary intention of making capital gains. (Not that they’d admit it to the IRD.)

The challenge is, there’s a natural limit to how much property prices can grow.

Over the long-run, it’s mathematically impossible for property prices to grow at a rate that exceeds the general rate of growth in an economy.

To the extent there’s any economic growth in this sort of scenario, property would suck up all of this growth – and then some. Instead of households using some of the extra income they earn on goods and services that improve their quality of life in other ways (such as holidays or investing in their children’s education), or instead of Governments using some of this growth to provide for better Government services or infrastructure, all of these gains would go towards property prices.

This might happen over a short period of time. But it’s not sustainable.

If we assume constant economic growth of 2%, and constant growth in property prices of “just” 4% (which is lower than most people spruik), it would take until 2059 (about 41 years) before the value of property was equal to the total value of assets in the economy: 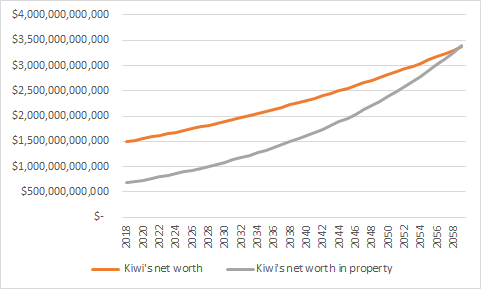 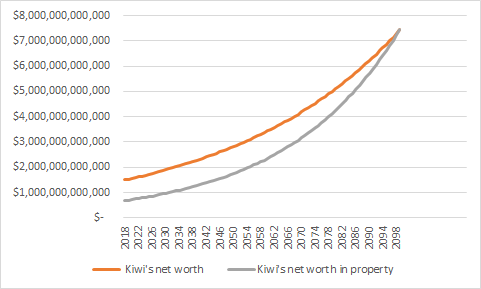 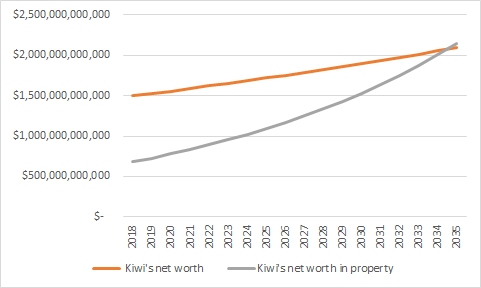 I’ll grant that there’s room for good faith debate about what proportion of our net wealth should constitute property relative to other assets. Maybe 45% is too low, and some further surplus growth is in order. Maybe it’s too high. I’ll stay out of that conversation.

My point, however, relates to the sustainability of property price rises and their relationship to economic growth more broadly.

I’ll add that there’s a strong argument that property prices will increase in real terms – ie, that they will grow at a rate higher than inflation (as distinct from genuine economic growth – the calculations above assume “real” figures, or are inflation-agnostic). This is because as people become wealthier, they’ll spend a greater portion of their extra wealth on positional goods, which people have to compete against each other to purchase. Property is a great example of a positional good, because there will always be a limit to the number of good properties in good areas, and no shortage of people who want to buy them.

Any argument that says that property will continue to grow in price at a rate higher than the general rate of economic growth is tenuous to me.

Economic growth is an upper limit to property prices over the long-run.

(Of course, I’m talking in aggregates here, and there may be opportunities to generate returns exceeding the aggregate return. I have no doubt there are people who can generate these excess returns, over and above what you’d expect from luck. But for every dollar generated above the aggregate, there’s a dollar generated below. If you invest in property, I wish you luck – and more importantly, I hope that you’re a savvy investor and you know what you’re doing.)

I would LOVE to be proven wrong and corrected on this. Let me know what I’m missing.